It has been investigated as a treatment for prostate cancer[2][3][1] and is currently undergoing phase II trials as a topical acne treatment.[4]

Like other SHRDs, the use of dimethylcurcumin for trans people has not been studied. It could potentially be used systemically in place of or in addition to an antiandrogen for demasculinization. As a topical treatment, it could potentially be used for tissue-specific prevention of masculinization, e.g., it could be used alongside testosterone to prevent body or facial hair while still allowing for a masculine fat distribution, increased muscle mass, and voice changes. 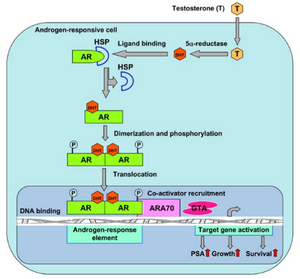 Dimethylcurcumin has two proposed mechanisms which contribute to its disruption of AR activity:

Dimethylcurcumin is a curcumin analogue,[3] but the latter mechanism of action appears to be unique to dimethylcurcumin[2]:[Supplementary Fig. 1] (however, see Research warning below). Curcumin has been used in traditional medicine as a treatment for hirsutism, an androgen-sensitive condition, but its efficacy has not been extensively studied.[citation needed]

Curcumin is well known to yield false positives on bioassays,[5] so results for curcumin analogues based purely on in vitro assays should be treated with scepticism.

Retrieved from "https://madgenderscience.wiki/w/index.php?title=Dimethylcurcumin&oldid=3992"
Categories:
Cookies help us deliver our services. By using our services, you agree to our use of cookies.