There are a number of techniques available, however most surgeons perform a highly-modified variant of the original penile skin inversion technique, which can be done in a single stage with 4-6 hours spent under the knife. If you started to transition early during male puberty, or your junk is very small even when erect, the sigmoid-colon technique may be a better option, and can also be done a single stage. See vaginoplasty for a deep discussion of techniques. Techniques outside of these two are either very old (e.g. two-stage surgery) or very new (e.g. cheek graft tissue.) 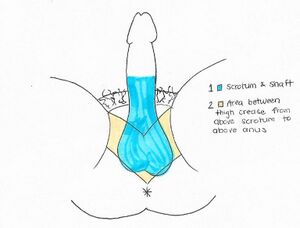 A picture illustrating the locations Dr. Bowers recommends to have genital hair removal in. 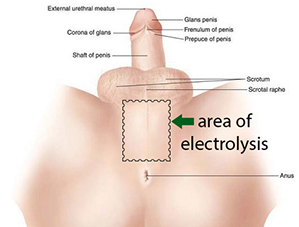 Different doctors have their own recommendations and methods to prevent hair growth inside the vagina post-op.

Recommends either 5-8 cycles of electrolysis or 3-5 cycles of laser hair removal, and further scrapes/electrolyzes anything that is left during surgery itself. [3]

The graft Dr. Chettawut uses for the inside of the vagina does not contain any hair, and although the grafts that become the vulva often do contain hair, chettawut recommends that most hair removal is left until after surgery so that any damage to the skin it might cause wont affect healing. He does however allow hair removal in one particular place, that is the area around the perineum (which becomes the vaginal opening), as the skin can end up slightly inside the vagina and potentially be mistaken for hair growth inside the vagina. He requests that any hair removal be finished 4 months prior to surgery to avoid complication caused by agitated tissue. However he asserts this is not necessary and that someone experienced in laser or electrolysis should still be able to access any hair regardless, and that the best alternative is to wait until 6 months after surgery to decide if any hair removal is necessary.[4]

Hair removal is preformed during surgery while preparing the graft,[5] Anecdotal reports from people who have conversed with PAI say it is done via a scraping method. Other reports suggest that PAI allows some hair removal around the perineum like Dr. Chettawut. [6]

Dr. Ting was trained in vaginoplasty by Dr. Bowers so the necessary hair removal is most likely the same as she requires.

Suporn does not require hair removal prior to surgery, as the follicles will be scraped from the skin during the procedure [7]

Dr. Brassard does not require hair removal prior to surgery, as he manually cauterizes the follicles during surgery. Though he does admit fine hairs may be overlooked and still end up in the neo-vagina. He does allow hair removal treatments although requests that they be finished 3 months prior to surgery. On the FAQ there is also a mention that post-op hair growth can be removed by a gynecologist with cauterization, though they themselves do not offer such a revision. [8]

Dr. Alter's practice is apparently hilariously expensive, with $500 for an initial consultation and up to $75,000 for GRS! That's far more expensive than any of the other surgeons. Combined with his almost total lack of web presence for GRS (Note to Mabel: check Susan's Place for this guy) there are major red flags here.

Retrieved from "https://madgenderscience.wiki/w/index.php?title=Comparison_of_GRS_surgeons_(Vaginoplasty)&oldid=4002"
Categories:
Cookies help us deliver our services. By using our services, you agree to our use of cookies.