The androgen receptor (AR) modifies the expression of androgenic genes, causing the virilizing effects of testosterone. Androgen receptors live in the cytosol outside of the nucleus in their inactivated state. When activated, the ARs are transported into the nucleus, and latch onto regions of DNA with a particular sequence called an Androgen Response Element (ARE.) Once active and bound to DNA other proteins (known as 'coactivators' and 'corepressors') latch onto the androgen receptor, causing it to modify nearby histones, which leads to certain genes to be expressed or inhibited.

Steroidal antiandrogens have a similar chemical composition to one of the androgens (testosterone or DHT.) These bind to the Androgen Receptor (AR), preventing Testosterone/DHT from activating the receptor, but as an 'antagonist'/'partial agonist' it doesn't "turn on" the AR to a significant degree.

Testosterone has roughly 100x less affinity to the androgen receptor than dihydrotestosterone (DHT). 5α-reductase enzymes convert testosterone to DHT. 5α-reductase inhibitors such as Finasteride and Dutasteride are antagonists of this enzyme, preventing DHT production rather effectively. However, 5AR is a critical step in the synthesis of important neurosteroids such as allopregnanolone. Therefore, blocking 5AR may have undesired psychiatric effects.

Nonsteroidal antiandrogens, such as bicalutamide and enzalutamide, bear no structural similarity to the androgens, but still bind to the ligand binding domain (AF-1), where DHT normally goes. Due to their unique properties and the way they can pull and push the conformation of the receptor in interesting ways, they may have a combination of different effects on the behavior of the AR that the steroidal antiandrogens have.

Rather than blocking DHT from binding to the AR, GnRH agonists disrupt the pituitary gland, which listens for pulses of the peptide Gonadotropin-Releasing Hormone (GnRH). When the pituitary gland receives a GnRH pulse, it responds by producing the hormones FSH and LH (known as gonadotropins). FSH and LH circulate in the bloodstream, binding to the gonads and causing them to secrete sex hormones. In the testes, FSH and LH cause testosterone to be secreted at a constant level. In the ovaries, FSH/LH cause estrogen and progesterone to be secreted, establishing the Menstrual cycle. GnRH agonists cause the pituitary gland to become desensitized to the GnRH signal, and eventually it stops secreting FSH and LH. This causes sex hormones to go away nearly totally!

GnRH agonists are an extremely targeted way of nilling out DHT or estrogen/progesterone, depending on what you're going for. However, they're incredibly expensive, rarely covered by insurance (in the US) and can only be delivered by depot injection or transdermal implant since GnRH is a peptide.

EPI-001 (a distant relative of the pesticide DDT which also has antiandrogenic activity, if I'm not mistaken) is an experimental drug which binds to the 'DNA binding domain' of the AR, unlike all the other antiandrogens. This may have the effect of pulling ARs off of the strands of DNA where they usually work their magic. 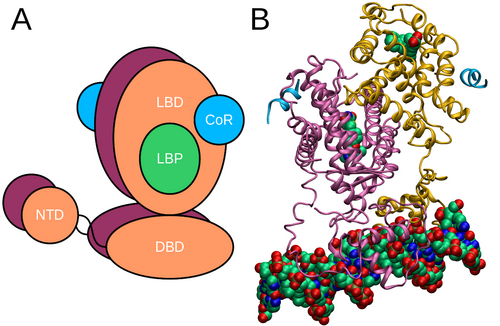 Schematic of the different components of a nuclear receptor such as the androgen receptor. [1] 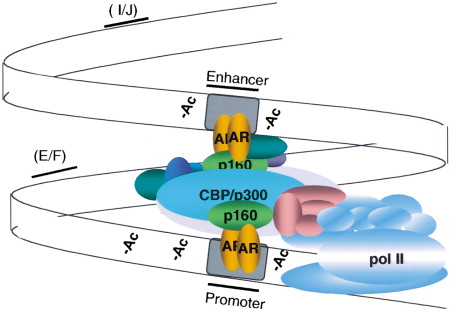 The yellow things are Androgen Receptors (ARs) latched onto regions of DNA called Androgen Response Elements (AREs). The promoter and the enhancer AREs are normally separated by thousands of base pairs. The big blue blob off to the right is RNA polymerase, which reads DNA and produces an RNA “blueprint” that will be translates into a protein eventually.

The gene that testosterone tries to stimulate in this picture is named PSA, and it is next to the enhancer. Normally it doesn’t get produced because its DNA is spooled up around a wheel-shaped protein complex called a histone (behind the white strip of DNA in the picture, with little “-Ac"s hanging off of it.)

When testosterone binds to the ARs, the Histone Acetyl-Transferase (HAT) protein CBP whacks on an Acetyl (-Ac) group onto the histone nearby. This makes the DNA wrapped around it unspool, and pushes it away from nearby histones so that the DNA is exposed and wide open.

Now that the DNA is unspooled, the ARs connected to the promoter ARE and the ARs connected to the enhancer ARE (thousands of bases down the film of DNA, remember) snap together, bridged by that big protein called CBP. That makes RNA polymerase jump onto the enhancer ARE, skip the few thousand bases in the middle of the loop, and start transcribing the mRNA for the PSA protein.

Once we stop having testosterone in our bodies, those histones stay unwound because those Acetyl groups stay in place on the histone, and the gene will keep getting transcribed.

But! Androgen receptor antagonists (E.g. the prostate cancer drug bicalutamide) actually make corepressor proteins like HDAC1 snap in, instead of HAT! Those snip off the -Ac groups like pruning shears.

Corepressors form part of a similar complex as coactivators, but either deacetylate (in the case of HDAC-1) or demethylate the chromatins that were activated earlier. This causes the histones to respool and hide the androgen-dependent genes from proteins which would transcribe them.

Retrieved from "https://madgenderscience.wiki/w/index.php?title=Androgen_receptor&oldid=4695"
Categories:
Cookies help us deliver our services. By using our services, you agree to our use of cookies.